Is A Fifth Indiana Jones Movie On The Horizon?

It’s been a while since we saw Indy in action. Six years to be exact, and some credit that with the lackluster reviews of Kingdom of The Crystal Skull, even though the movie made just shy of $800 million dollars. But a single line in a trade publication may have confirmed that Harrison Ford could be putting the Fedora and bullwhip back on. 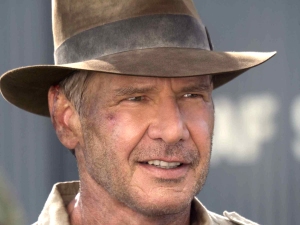 In a September 30th article about a film course in Variety, it was quoted as saying that cinematogrpaher Janusz Kaminski was working with Steven Spielberg on the next Indiana Jones movie. Variety edited the story soon after and said that was incorrect. Or was it Spielberg and Disney putting a lid back on something that shouldn’t have been made public yet?  Well, we won’t know for sure, for some time, but there was also a rumor that to get Harrison Ford to sign up for Star Wars Episode VII, Disney had to agree to a few more Indiana Jones movies.

There is also something else to consider. The fact that Ford is in his 70’s and has been banged up on previous Indiana Jones movies, and just recently took a header on the set of the Millenium Falcon for Episode VII. And the passing of the Fedora to Shia LaBeouf, doesn’t sit well with many fans today. But what about the rumors of Robert Pattinson or Bradley Cooper putting on the Fedora? Cooper I could see as a strong possibility, with Guardians of The Galaxy under his belt. I’m on the fence with Pattinson, because of all that Twilight crap, but his role as Cedric Diggery in Harry Potter, gives him some extra GeekPoints™ in my book, so that swings things a little closer to his favor.

Now again, this is all speculation and rumor, so we have no clear answer if there really is a new movie in the works or not. And it’s doubtful anyone at Disney will say anything until they are ready. So for now we wait and see. Till then, I’ll be over on the couch eating popcorn and watching Raiders and Temple of Doom for the 45th time, each.