Do Atheists Care About Carrie Underwood?

Carrie Underwood has a new song…who else is excited? I claim to be a huge fan…I only have all her CDs in my car and have been to 7 of her concerts…but that’s besides the point. Carrie is an amazing talent, an amazing woman (soon to be mom), and puts on an amazing show (just ask my husband who even enjoys her concerts and doesn’t mind coming with me). The question is do atheists care about her? 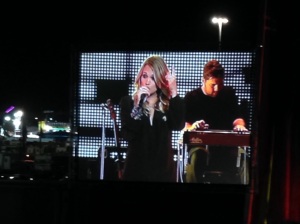 I bring up that question because of her new song, “Something in the Water”. It’s a Christian song about being washed in the blood of Christ. Yes – for all of you that care – and for a reference point, I am a Christian. As soon as the song came out some Conservative websites jumped all over it saying that atheists were upset about the lyrics and what the song stood for.

Need I remind you about “Jesus Take the Wheel” that was released by Carrie when she first came out. It’s no secret she’s a Christian. She’s never tried to hide it. It’s not like she’s the first artist to sing a Christian song. If you don’t like it, don’t listen to  it. That’s why there’s a tuner and volume button on your radio.

So I went searching on the web today to try to find articles about atheists and Carrie Underwood. Not many show up so I have a hunch that the Conservative websites were just stiring the pot and trying to cook up a story. Not very successfully I might add. Everyone is entitled to their beliefs and opinions. End of story. There really shouldn’t be a story anyway – it’s a song, plain and simple – and a pretty amazing and powerful one at that.

Like Carrie? There’s a new CD coming out in Decmber. It’s her greatest hits decade one CD. It includes the new single. It’s on my Christmas list! Listen to the new single below and let us know what you think about it!