← Jason Voorhees Is The Scariest Horror Villain of All Time, As Voted By You
Sorry Ladies, No Full-Frontal Nudity in ‘Fifty Shades of Grey’ Movie →


Someone has built a TARDIS and has been moving it to different places in Troy, N.Y. When a friend told me she had found where it currently was, I hopped in the car to get some pictures and record a little “Man on The Scene” news report about it. While there, we got a little surprise.

Actually, it wasn’t a surprise, it was just my friend Diane, who looks a lot like the tenth Doctor Who, David Tennant, stopping by to check it out and help with this short video for some Halloween fun. From what I have been told, 2 local artists built it along with help from Center of Gravity, in Troy, and have been moving it from place to place in the city. Right now, it looks like a few people have banged it up, but the word is, a second one is being built.

If anyone knows more about this, let me know and I’ll spread the word from this site. In the mean time, enjoy the little video and some of the photos we took.

Dianne as The Doctor 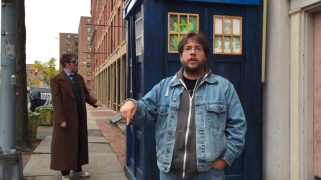 The TARDIS in Troy, NY

A Doctor and his TARDIS

← Jason Voorhees Is The Scariest Horror Villain of All Time, As Voted By You
Sorry Ladies, No Full-Frontal Nudity in ‘Fifty Shades of Grey’ Movie →