← An Important Note to Shoppers This Holiday Season…
An Open Letter to J.J. Abrams and Disney About The Star Wars Teaser Trailer Fiasco →

When President Obama charged FCC Chairman Tom Wheeler, a former lobbyist for big media, with making broadband providers the same as utilities, Wheeler didn’t really have to do anything. He doesn’t take orders from the President because the FCC is an independent body that is appointed. But it looks like Wheeler got the message that the Internet needs to be protected.

We’ve already seen it, what the Internet of the future may look like without protection. Netflix was essentially forced to pay a “tribute” to Comcast so it’s customers could have faster connections to use their Netflix service. Comcast has said it’s business as usual, but it looks pretty clear to me that they wanted Netflix to pay, I mean they had been telling them to for a while. And even Verizon was doing the same thing. So Netflix took the only action it could, and paid the “bribe”. 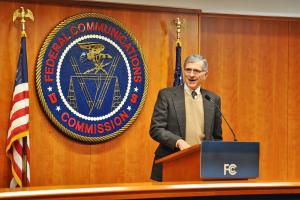 But now it’s come to light that Verizon, Comcast and some others, plan to sue the FCC if they come out with Net Neutrality rules. Not might, but when, they come out with them. It seems to me that these companies are so against these rules, that they only want one thing, more money. Oh wait, that’s been their motive all along! An open Internet is not what they want. Why? Because Comcast wants you to buy only from them. Want faster service and movies, but with crappier customer service? Upgrade to their Xfinity package and pay through the nose for junk!

Chairman Wheeler has said they are making sure they are ready for this legal attack, so when it does happen, and it will, that they can win. I’m also sure, since he did work as a lobbyist for these companies, he’s trying to be fair to them so they can come out of this without as much of a loss, because they will have losses. Their whole model is built around an Internet that they can control. I will put my faith in Wheeler for now, as he is the best thing going for us to keep the net Free.

← An Important Note to Shoppers This Holiday Season…
An Open Letter to J.J. Abrams and Disney About The Star Wars Teaser Trailer Fiasco →