Seeing a herd of buffalo loose on the highway isn’t part of your typical morning commute, but that’s exactly what happened locally today.  Still on the loose, a herd of buffalo escaped from GEM Farms in Schodack and the animals have made their way all over the area.  Watch a video of the beasts on the run near the Thruway.

Living in Upstate NY., we generally balk at wildlife on the side of the road.  However, seeing a herd of Buffalo on the way to work this morning definitely has all of our attention.

A herd of buffalo broke loose from GEM Farms in Schodack and has been spotted on Schodack Island and at last check, over on River Road in Bethlehem. The animals crossed the Hudson, halted traffic as they crossed over RT 144, then over the Thruway.

There were 15 buffalo roaming the Capital Region.  Given the size of the animals (five feet/2,000 pounds) and speed they can run (40 MPH), they may be shot and killed to keep the area safe.  At this time, about four of the animals have been shot.  Hopefully everyone, animals included, can come out safely from this story.

News outlets have Tweeted pictures of the herd in the area: 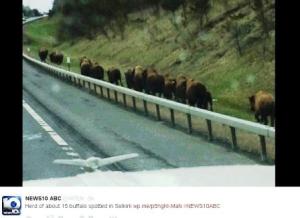 WRGB also shared a video of the buffalo as they were crossing near the Thruway.

Did you see the herd this morning in your area?  Share pictures and stories if you have them.