When it comes to the Joker, one of Batman’s most famous villains, if it’s not played by the right person, then all bets are off as to the fans liking it. And so far, the 2 people who played him on the screen, have nailed it. Then, there was Jared Leto. 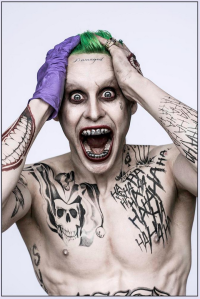 Yeah, it’s not really Jack’s reaction and I know we haven’t seen Leto’s performance yet, but the picture that was released of Leto in full makeup for the upcoming Suicide Squad movie, just makes me want to cringe into the fetal position and die. Yes, I said die. As in going to the great beyond, to join the choir invisible. To be an ex-geek. To no longer pine for the fjords! OK, Monty Python references aside, he looks horrible! I know DC wants it be a Dark realistic kind of DC universe, but come on, this is ridiculous. This video eloquently puts how I feel about this epic fail of a character, into perspective.

Now some have come out and said that this picture is not really what he will look like in the movie. This is just a more edgier take on the look. Well, if that is what they are trying to sell, I’m not buying. And they will need to really impress me if they want my money. And DC has yet, to impress in my opinion. Good luck DC, you’re going to need it.

Again and again I have said in episodes of The Geek Show, that DC keeps shooting themselves in the foot when it comes to their movies. I think this is more proof of that, as the Internet basically looked at this and in a collective voice said, “Hell. No.” The only people who will go to see this are the die hard DC fans, and I have a feeling this may be the movie they finally say, “enough”. And I will not blame them in the least little bit.