Another Reason to Live in Boston, Massachusetts. Oral Gratification on The MBTA

I’ve visited Boston a few times and I gotta say it’s a nice place to visit. The Sam Adams brewery is there, their Museums are awesome, and you can get a hummer while waiting for train. But I don’t think that you can use your Charlie card for that. 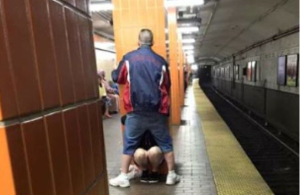 Well, it’s not like you can go and just get one, but this couple took advantage of the lack of police in the station, mostly due to some budget issues, and just wanted to share their love by the girl giving her guy some mouth party. It all went down (pardon the pun) last Friday. And an irate traveller sent a very terse message to the MBTA:

“Dear MBTA, I understand you are having financial problems and it is difficult to maintain a broken system, however my tax dollars should be going to pay your police force because I shouldn’t have to stand next to a man receiving oral sex.”

So if presented with the opportunity, would you do something like this?