The fifth season of HBO’s “Game of Thrones” has wrapped up, and it had some highs and lows. The finale was filled with a whole lot of set up for what’s to come in the sixth season, and for now book readers and show watchers are on the same page.

I know that a lot of people considered much of this fifth season of “Game of Thrones” to be a little bit on the boring side. George R.R. Martin wasn’t involved with the writing of this season as he is trying to finish the sixth book in the series, “The Winds of Winter.” So the show runners and writers took some liberties this season with what they were doing with some of the characters.

As a matter of fact we didn’t even see Bran Stark and his shenanigans beyond the wall at all. They were pretty upfront about leaving him out of this season. Which is totally fine, because there are so many other stories happening it was nice not to have to follow another one.

So with that being said, let’s get into what I thought, and yes there are spoilers.

In the previous episode we say Stannis Baratheon do the unthinkable. He sacrificed his daughter to the Lord of Light with the help of Milesandre. It was quite remarkable how easily she convinced him and she didn’t even show her boobs. So he burns his daughter at the stake and his wife must have decided that she couldn’t live with herself. After the discovery that half his men deserted him, Stannis discovers that his wife has hung herself. Also, Milasandre has also abandoned him.

It’s at this point that he has to be wondering if it was all worth it. Yeah, maybe he’ll be King, but he has nothing left. So off he goes to take Winterfell, but he is met on the field of battle by more than triple the men that he has thanks to Lord Bolton. After a very brief battle, Stannis seems to be the last man standing, and finally gets what’s coming to him by way of Brienne of Tarth. She’s still out to avenge the death of Renly Baratheon. We see her swing the sword at a wounded Stannins, but his fate is left up in the air.

Meanwhile, back at Winterfell: 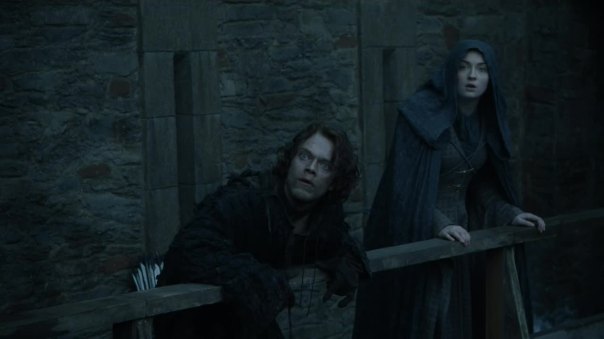 Sansa has decided to finally light that candle now that Ramsay is out slaughtering all of Stannis’ men. So she goes out, only to be met by Ramsay’s psychotic girlfriend and Theon, I mean Reek. She wants to take Sansa back to her room where she is basically being kept as Ramsay’s sex slave. The psycho girl starts talking about all the horrible things Ramsay is going to do with her, and Theon flips back to the side of the sane and throws her off the ledge. We see her head go splat, and that’s that. Then Sansa and Theon jump the giant Winterfell wall to run away, but I don’t know how they both didn’t break their spines. Their fate is left up int he air.

Arya Stark has decided to go rogue on the faceless assassins and kill the people on her list. That would include Meryn Trant, who is a big child abuser/molester. Basically a giant creep. So she takes a face and gets into his room where she proceeds to murder the hell out of him. Like, mutilate, and then murder. it was pretty disgusting. Let’s just say that he didn’t “see” it coming. You know what I mean.

She heads back to the House of Black & White to return the face she stole only to be discovered. She is then told that she stole a life from the many faced god, and it wasn’t her life to take. Faceless Assassin dude then kills himself to restore balance to the force, but he doesn’t really.  He tells her that using a face when you’re still someone is as good as poison. Suddenly Arya starts to go blind. It was weird. Her fate is left up in the air.

Back in Meereen/Somewhere in the North?:

After Daenerys gloriously took off on her dragon to escape certain doom, her entourage seems to survive the attack in the fighting pits. We see them sitting in the throne room wondering what’s next for them. Tyrion wants to go off and search for her, but everyone agrees that he should remain behind the govern the city. So Jorah and Daario Naharis go off on a quest to find their Queen.

We finally see where Daenerys is with her dragon, and he’s pretty injured and just wants to sleep. Basically dragons are like big cats, from what I can see. Sure, they’ll show you affection, but they’ll also just ignore you until they want something. So he’s not cooperating with her, and she has no idea where he’s flown her to. It looks to me like it’s somewhere in the North, maybe. I’m not really sure. She goes off to find food or maybe just inspect her surroundings and is suddenly surrounded by hundreds, maybe thousands, of what looks like Dothraki riders. Where they came from is beyond me. Once again, fate left up in the air.

For everyone who wanted to see Cersei get what was coming to her, you got it. After confessing her sins of incest (almost all of them) to the High Sparrow, he tells her she can return the Red Keep. Of course there’s one catch. She has to parade herself in front of EVERYONE to atone for the sin that she’s committed. Not before a nice shave and a haircut.

So she’s walking through the city and people are screaming at her, and throwing shit – literal shit – at her. It’s pretty horrible. Though I did not feel bad for Cersei. She’s done too many horrible things. She certainly deserved every last piece of poo that was thrown her way.

Finally she reaches the Red Keep and is greeted by the science experiment that she has been secretly creating. It’s clearly The Mountain, and he looks like he’s Frankenstein’s monster. Absolutely insane. I can’t wait to see where that goes.

Other shit (before I get to the big one):

In Dorn Jaime is returning back with his niece/daughter. They have a very touching good bye with the people of Dorn where The Red Viper’s widow kisses her on the mouth for way too long. It immediately made me suspicious. So she’s on the boat with dear old dad and they have a nice moment (as nice as finding out you’re a product of incest can be, I guess) where she tells him she’s always known he was her father. Then she starts to bleed from her nose because she was poisoned. How? From that Dorn ladies poison lips. I knew that mouth kiss was weird and also too long. So she’s as good as dead. Also, you can expect a war between the Lannisters and Dorn for sure now.

Jon Snow has returned with a whole bunch of Wildlings that he has saved. It has clearly affected the men of the Knight’s Watch, who don’t seem to trust him a much. So his closest friend, Samwell Tarly, asks if he can leave so that he can learn more from the Citadel and so that Gilly and the baby will be safe. Jon reluctantly allows it to happen, and off they go. Also Milesandre and Davos are currently at Castle Black on their own agendas. Davos to get supplies and men, Milesandre to avoid death. Davos has no idea that everyone is dead until Milesandre tells him. He’s clearly crushed, and she seems pretty deflated, too.

That now leaves Jon Snow alone and vulnerable now that most of his trusted friends are gone. So he’s sitting in his office going over notes when Olly, that stupid little asshole, runs in the say that one of the Wildlings has seen his Uncle Benjin. Now this was something that pulled me right in. We haven’t seen from Benjon Stark since season one! So Jon runs out to a group of men standing around. He does not find anyone who knows his uncle. He finds himself face to face with a sign that says Traitor. He turns around and the cowards of the Knight’s Watch all proceed to stab him repeatedly. What seems to be the final blow was delivered by Olly, that little asshole, and Jon Snow is left on the ground, bleeding.

Oh, and again, his fate is left up in the air. From what I can tell from the books, it is also up in the air. Basically this episode was a GIANT cliff hanger.

I mean, my immediate reaction to that was something like:

Then I went more to a sad phase:

After that I got to thinking that they never actually showed Jon Snow die. Also, he seems way too important to the story to go out like that. Right now Milesandre is at Castle Black. She’s magic. Davos is also there, and he is a good man. Some how, some way, he will live and be nursed back to health. There has to be some reason why they showed all that blood flowing. Possibly Kings blood. You know, that whole R+L=J thing. So we’ll see what happens next season.

All in all, Joffrey would have been pretty happy with all the death in this episode.

Posted on June 15, 2015, in Entertainment, Television and tagged Game of Thrones, HBO. Bookmark the permalink. Leave a comment.