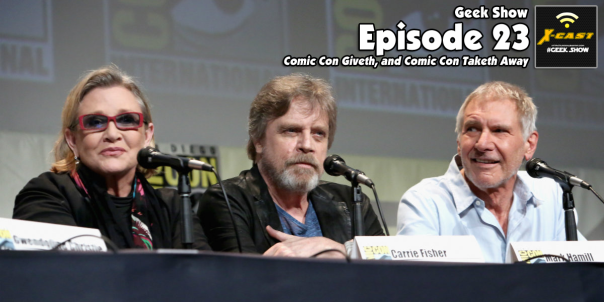 So it’s been a little over a week since Comic Con ended, and we’ve had time to digest a lot of what happened, so we’re going to regurgitate some of that info. See what I did there? OK, anyway, time for a new episode!

BJ and I covered a lot of the trailer action, and gave some thoughts on what we think and what we expect to see in these movies that folks at the Con saw trailers for. But not everyone is allowed to see them. Did I just hear you ask, “What are you talking about?” I knew I did. But yes, some of the studios feel it’s ok to show stuff just to the people at the Con but the fans that couldn’t go or get tickets, well, they are not so hyped about them. I wrote a little something about that last week, as did BJ, so if you get the chance, go ahead and read them and you’ll see what we mean.

So we talked about the new Deadpool movie, as well as X-Men Apocalypse, The new Fantastic Four, Batman vs. Superman, the Star Wars reel, and a whole bunch more. That whole bunch more being Suicide Squad, TV Flash and Arrow and the rest of the DC TV universe. So a full show of goodies. So make sure you have your favorite beverage before you start, because you won’t want to stop when you get going.