When wrestling legend, Rowdy Roddy Piper, passed away last week, the WWE paid tribute by having all superstars don Hot Rod t-shirts in honor of the all-timer.  Bombshell diva, Lana, posted a photo on her personal Twitter account, also honoring Piper.  Looking at the photo, this appears to be more of a shameless self-plug rather than an act of kindness.  Check out photo and you be the judge.

After Roddy Piper’s passing, the WWE superstars all showed support for the icon by wearing Hot Rod t-shirts, similar to the shirt Piper wore in his prime.  Check out the wonderful gesture: 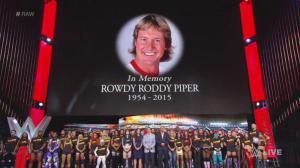 Notice most WWE Divas cropped their shirts  – probably to draw more attention and viewers.  However, is that really necessary during a memorial? That brief period where you should focus on the situation rather than ratings.  I noticed one diva in particular, Lana, posting on her Twitter account, a photo “honoring” Piper. 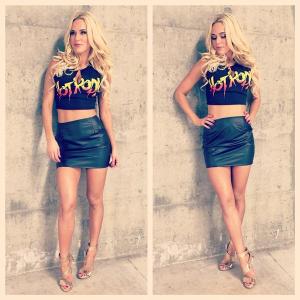 Other than the shirt, I don’t really see a tribute to the fallen legend.  No eye contact with the camera.  Not taken in a wrestling ring, and posing seductively against a wall.  Not quite sure this is really “honoring” someone – rather, this looks to be a shameless self-plug here.  Yes, she is extremely hot.  Yes, I’ve been distracted a good dozen times while looking at the photo and trying to type this story (which would explain any typos).  Yes, I’m still looking at the photo.  HOWEVER – isn’t this just slightly offensive?

To Lana’s credit, she did share an actual tribute, sans sexy pose, a few days earlier on her account, recalling the time she was on Roddy Piper’s famous skit – Piper’s Pit, stating:

It was a privilege to be the last that stood in Piper’s Pit. http://wwe.me/QmOCy  thank you Mr. Roddy. #RIPHotRod

I’m sure Lana had no ill intentions in posting the photo.  Had she left off the “in honor of”, I would be fine with the Tweet.  Just not sure that this photo is appropriate.

How do you feel about the photo “honoring” Roddy Piper?