What a week it has been! And the topper of it all, is of course, the new Star Wars trailer! What was your reaction? OK, hold that thought while we share ours in our latest episode. May The Force Be With YOU!

So as you can guess by the title, this episode is mostly about Star Wars. The new trailer, and the Rebels animated show. We cover some rumors and speculation and throw in some of what we think about it all. We also kind of gush that we’re less than 60 days away! 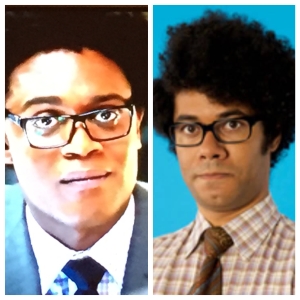 The picture Rich showed BJ during the show.

We also talked about The Flash, and Arrow, getting caught up on the last few episodes. I was kind of taken by surprise at the look of Echo Kellum’s version of Curtis Holt, aka Mr. Terrific. I don’t know about you, but he looks a lot like Richard Ayoade’s, Moss from the UK TV show, The IT Crowd. I’m kind of curious if it’s an homage’, a rip off or a coincidence? But you tell me, he looks like the spitting image right?

BJ also explained his Agents of S.H.I.E.L.D. theory about Lash, and I gotta say it’s a solid one! The pieces do fit together nicely for it. What do you think about his theory? Let us know in the comments below.

That’s all for this time, remember to tune into X1 to hear our show streaming! Till next week!