Justin Jordan is back with a new character that is, reluctantly, set to save the world. 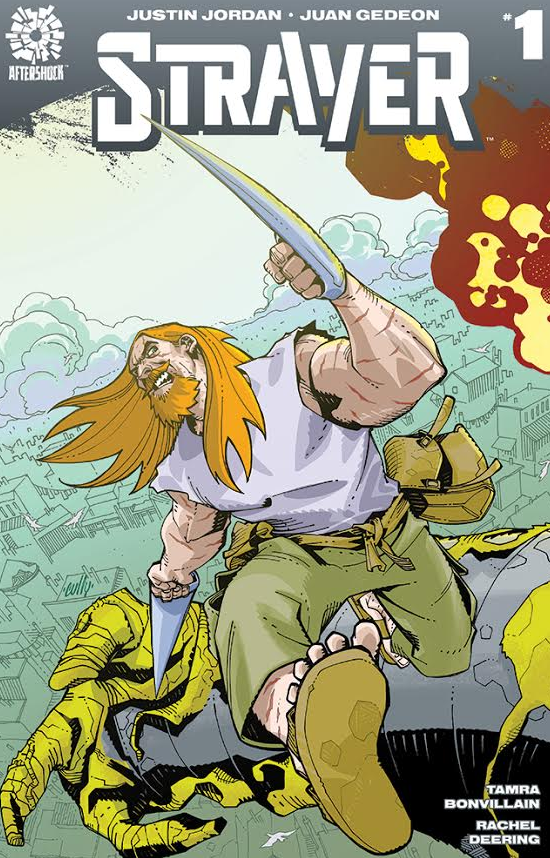 If you’re looking for a fresh take on a hero in a Dystopian future, look no further than Strayer. The first issue takes us into a world that is far different than the one we are used to. Humanity has to pick itself back up, but who’s willing to help? That would be Strayer, the title character.

The world of Strayer takes us to a future where things have gone wrong. We learn that at one time society was flourishing before being taken under the “Church of Grammar.” There are other evils in Titans, which seem to be machines, that can totally destroy an entire town or city.

Some are willing to fight. We get introduced to Mala Tenboom  who is recruiting warriors on her quest to return the world to the beautiful place that it once was, the time of dreams. The biggest problem is that no one is willing to do it for the greater good. There’s always a price.

What I like about Strayer is that he is heroic. He’s wiling to get the job done, but he also wants to be rewarded for doing so. Who can blame him for that? There is some real mystery in his character. Clearly he is someone of great importance and I can’t wait to find out more.

This is a book that you’re going to want to buckle up for because it’s action packed from start to finish. It will suck you into the story in the first issue and leave you wanting to come back for more.

Justin Jordan (Green Lantern: New Guardians, The Strange Talent of Luther Strode) has once again given us a character that we can root for and also relate to. Plus the art from Juan Gedeon (Ghost Racers, Gwenpool Special) is always a great addition to Jordan’s storytelling.